The Truth About
US Voter Fraud

US Voter Fraud and the Democrat Party

Support for US Voter Fraud is policy all the way to the top in the democrat party. Why do you think it is that the political leadership on the "Left" refuses to allow for the requirement to have a US photo ID before voting? They claim it disenfranchises the poor and the elderly.

﻿Who is it that doesn't have US photo IDs? It is Illegal Immigrants. There is no US citizen that can make it to the voting booth that cannot get a legal US photo ID.

US Voter Fraud Made Easy

You have to have a photo ID to buy beer, to get welfare, to see certain movies, to drive a car (if you are a legal citizen). But it is said that we should not have photo IDs to vote on policies that dictate how we live; or to choose whom we would like to represent us.

Do you realize that there are unscrupulous political activists, right now, that make it their business to figure out new ways to circumvent the US Voting System? ﻿

The biggest crime in the world today is identity theft. Don't you think that there are political activists, right now, registering people to vote that should not be voting?

Here is just one example of how easy it is to steal identities for US Voter fraud.

Have you ever checked the obituary notices in the newspaper?

The names of the deceased are not automatically taken off the voting registration once someone passes. If you do not need to have a photo ID to vote, these names are wide open to identity theft and Voter fraud.

How many obituaries are there per day in one newspaper; in the hundreds of newspapers around the country; day after day, week after week and year after year? 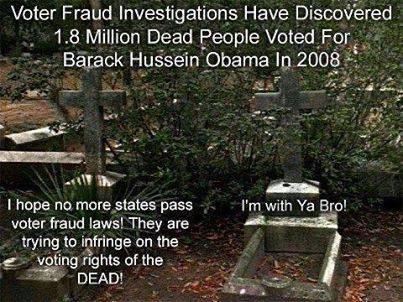 That is just one source of identity theft for political activists' perpetrating US Voter fraud.

Without a photo ID needed to vote; even fictitious names can be registered to vote. Without legitimate photo IDs required to vote, there is nothing stopping political activists from voting multiple times at different precincts.

Without a photo ID needed to vote; busloads of political activists from neighboring States are bused in to vote in your State's elections.

US Voter fraud cancels out your well thought out and researched vote. In close elections, Voter fraud has tipped the outcome against the will of legal voters.

(Absentee ballots are wide open for US Voter fraud.)

(It is prudent for all US voters to not be blasé about your voting privileges. There are too many political activists seeking to defraud the election outcome. The election outcome may not be in the best interest for you or for the survival of the country.)

Asking for US voter ID is not voter suppression. But the IRS targeting conservative groups (asking for the content of their prayers) is.﻿

The Real Voter Suppression of 2012 - By John Fund

Is Voter Fraud a Real Problem?

SEIU, AFL-CIO, ACLU and Others Ready Attack Against US Voter Integrity

Howard Dean: Only Way Obama Loses Ohio Is Through Fraud

Post-Election Survey: Voters Have No Confidence in Media

Election 2012: The Final Victory of the Counter-Culture

Dozens in Connecticut Registered to Vote After Death

Did Obama Cheat? How to Answer the Question

The Democrat Party VS the Republican Party

The Racist History of the Democrat Party

Are Somali Pirates Voting in Ohio?

Obama vs. the Rule of Law

How it All Changed

Obamacare -- the Truth is Out


When there is US Voter fraud
it cancels out your well thought out
and researched legal vote.

GRUBER: "Lack of transparency is a huge political advantage."

A Message to the Hispanics

Setting The Record Straight On The Democratic Party

A Call To Arms For White People Of Truth

Former DOJ members go on the record to expose voter fraud as well as several tactics used by the liberal machine to commit voter fraud:

Many of the experts spoke about “spigot cities”, major cities that end up tipping the vote for a liberal candidate when the rest of the state would be conservative. While some would argue that major cities may attract a more progressive and liberal-minded voter, the documentary crew spoke with experts who revealed that these major cities were also places where voter fraud could be easily carried out. They also revealed that many of the “spigot cities” were places where the Obama campaign had a high organized presence.


Hundreds of cases in Florida of undocumented democrats voting illegally.
THIS IS JUST THE VERY TIP OF THE ICEBERG FOLKS!

Published on Apr 3, 2012 by RevolutionActivist

The tip of the iceberg of Obama US voter fraud and voter intimidation in 2008. If Obama is allowed to run in 2012, with the power of the presidency behind him, with Eric Holder to pad the voter rolls with his phony crusade against voter ID, the corruption within the 2012 election will make 2008 look mild.

Michael Savage:
Why Obama is confident of election outcome?
How Obama fixed 2012 election.

Massive voter fraud thanks to Obama,
Holder, the Democrats and ACORN

Your Government Is Commiting Voter Fraud EVERY DAY!!!

What does US Voter Fraud have to do with money making ideas?

All the money making ideas in the world will not help you unless the policies governing the flow of money are conducive to the business of making money.

Unfortunately there are politicians that do not have the countries economic interest governing their politics and policy making. Their interest is their own selfish quest for power at whatever means necessary.

In order to put responsible leadership in the White House, we need honest and fair elections. We should not tolerate a voting process wide open to fraud and abuse.

We need an educated and informed electorate to choose leadership that represents the greater good of the Country. It does not serve the country well when the “main stream” media spin, lie, misrepresent and manipulate the news to misinform the public about the candidates or voting issues.

We do not need leadership that represents special interest groups just because they pay more money for that Candidate’s or Party’s campaign.

Where are we headed now?


"Conservatives are rightly concerned that the left wins close elections by fraud.  The photo identification laws which Republican legislatures have passed are sensible reforms to make the theft of votes harder, but judges whose partisan allegiance and ideological tendencies are transparent; invent reasons not to enforce those laws." The Sure Cure for Voter US Fraud - By Bruce Walker, Sept. 2012

The truth about US Voter fraud
is that voter fraud
IS...BIG BUSINESS
for the democrat party.

Obama Bagged Over $2 Million in Invalid Donations for September

The real history of LBJ and Race; Goebbels would be proud


"Collusion"
How the Media
Stole the 2012 Election

The Cost of
Big Government

The Cost of
Illegal Immigration

The Democrat Party
VS the Republican Party

The Racist History of the Democrat Party

"We are not
suppressing the vote
we are suppressing
voter fraud"

Our government was built upon the belief that election results represent the true will of the people.

Understandably, many Americans have lost faith in the integrity of our nation's election results because fraud and law-breaking has become all too common in our electoral system.

Regardless of the outcome, we should be able to expect no less than honest election results free of voter fraud and voter suppression.

﻿True the Vote is a citizen-led effort to restore truth, faith, and integrity to our elections.

True the Vote is based in Houston, Texas and headed by Catherine Engelbrecht (President)

36 Times Obama Said
You Could Keep Your
Health Care Plan

Report:
Obama Knew He Was Lying on Keeping Your Insurance